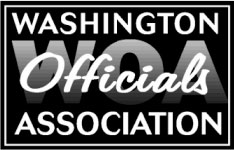 RACINE, Wis. — The Washington Officials Association (WOA) and the National Association of Sports Officials (NASO) have signed a five-year agreement that enrolls all 5,000-plus WOA members into NASO and provides them with NASO’s full complement of benefits. WOA members became NASO members in early August.

“To say that we are excited about this new partnership between the Washington Officials Association and NASO would be a gross understatement frankly,” said Barry Mano, NASO president and publisher of Referee. “NASO has been supporting sports officials, advocating for sports officials for the last 37 years. And I would characterize this partnership with WOA as one of the most historic that we’ve ever encountered.”

“We stand ready to provide the benefits and services to help WOA be the best association it can be,” Mano said. “WOA on its own is a darn good association and we think working together with us is not only going to make WOA better, it’s going to help NASO become even more of an advocate on behalf of all sports officials, not just those in Washington.”

WOA President Dean Corcoran expressed similar sentiments. “I am truly excited about the partnership between the WOA and NASO,” said Corcoran. “This is one of the most forward-thinking undertakings of any state association. This partnership will provide our officials with better information and training, plus the added security of superior insurance coverage. These benefits can only lead to better satisfaction and retention of our officials.”

Additionally, WOA members will receive “9 Rules” publications that explain common misconceptions about rules to distribute to potential officiating candidates as part of a recruitment campaign and digital publications intended to initiate a retention initiative, including content provided to officials in their “offseason.” Continued publication of customized Mechanics Illustrated officiating manuals has been rolled into the agreement.

“The WOA is honored that NASO would look to the WOA for such a historic partnership,” said WOA Executive Director Todd Stordahl. “The Executive Board and staff look forward to this opportunity to improve the state of officiating in Washington.

“This partnership provides an immediate improvement to our current statewide program and allows for new and innovative ways to recruit, retain, train and mentor officials,” Stordahl said. “With numbers declining throughout the country, it is time to think outside the box and look for creative ways to tackle the problems encountered with officiating. We currently have two choices: continue complaining about not having enough officials or take a drastic approach at changing the landscape. The WOA Executive Board unanimously felt the time was right to make a drastic change and NASO was the obvious choice in a potential partner.”

“NASO and Referee will work tirelessly to promote the actions of the WOA throughout the country as one of the nation’s pre-eminent training organizations and give it the visibility and acclaim it deserves,” said Ken Koester, NASO and Referee’s Chief Business Development Officer. “To me, this partnership sends a strong message to the officials in the state of Washington that they are an essential part of the game. We relish the opportunity to provide unparalleled benefits and resources to further that direction and communicate that message to WOA members.”

It’s an exciting endeavor for both organizations. “We are here to serve the members and the leadership of the WOA,” Mano said. “That is critical to us. We are going to be the best partners the WOA ever had, and that’s a guarantee from me, personally. We appreciate the WOA’s leadership and vision to embark on such a historic course. We look forward to a very long and productive relationship with the WOA.”