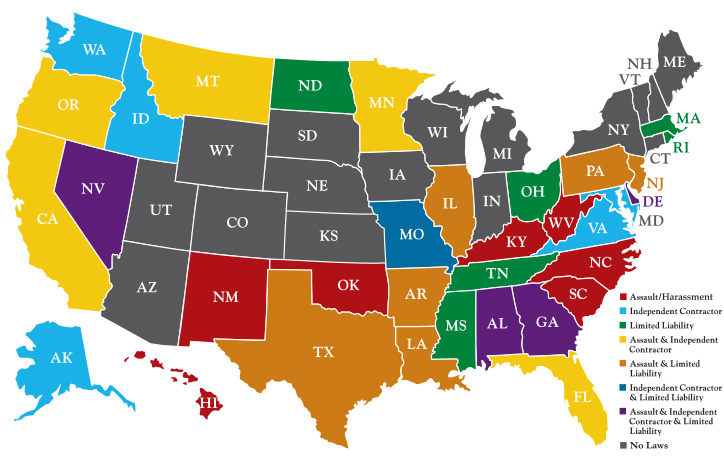 Has your state passed laws related to assault and/or harassment of sports officials, officials’ liability and independent contractor status? State laws criminalizing attacks and harassment of officials serve as a deterrent and tell prosecutors, judges and juries that such acts are to be taken seriously. Limited liability laws are an added protection to exempt officials (sometimes only volunteer officials) from liability for injuries unless they are grossly negligent. Independent contractor laws classify officials as such — at least for the purposes of workers’ compensation.

While the scope of state legislation varies, sports officials should be able to perform their duties without threat of personal injury, administrative hearings or litigation because of their game calls. State legislators can show support for those who officiate by passing laws to protect them.

NASO has been bringing attention to assault/harassment, liability and independent contractor issues for years. The map, updated for 2022, displays the states that have passed laws dealing with those issues. There are currently 22 states that have officiating assault and/or harassment laws (including 20 with criminal laws and two with civil statutes), 17 with limited liability legislation and 15 states with independent contractor laws. In addition, three states — Idaho, Washington and Missouri — have supportive resolutions for officials. How does your state match up? If there is work to be done, consider getting involved in pushing for legislation.

Share with your association what other states have done in terms of legislation. Move forward united. You can also work to get other officials associations in the area or your state association to back your cause.

Ask members of your association and area officials associations to sign a petition asking lawmakers to take action.

Gather and present information to legislators about incidents that have happened in your state that apply, such as officiating assaults, etc.

4. Get on the phone or internet.

Contact your legislators and meet with them to present information that may help to pass the legislation.

After talking and meeting with your legislators, follow up and keep reminding them you’re available to testify at hearings. Keep the topic in the forefront. Even if a proposed bill doesn’t pass the first time, it doesn’t mean it won’t pass in the future. Take time to gather more support and continue to pursue the legislation at the next opportunity.