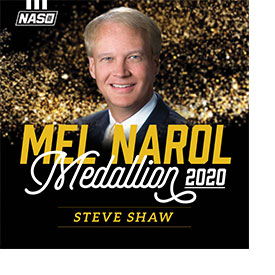 Steve Shaw, College Football Officiating (CFO) national coordinator of officials and NCAA football secretary rules editor, has been selected by NASO as the recipient of the 2020 NASO Mel Narol Medallion. Shaw became the national coordinator in March 2020 after serving as the coordinator of officials for the Southeastern Conference (SEC) from 2011-19. He also had a long, successful career officiating in NCAA Division I football, including being the only referee in the Bowl Championship Series era to work two National Championships.

“The Mel Narol Medallion award is ‘inward’ looking as I like to say,” said NASO founder and president Barry Mano. “It is presented to someone who has served NASO’s mission on behalf of its members. Steve has done that for more than a decade.”

“I was honored and humbled, and excited, to get the call from Barry Mano,” Shaw said, regarding the award.

Shaw served on NASO’s board of directors from 2009-13 and as chair from 2011-12. He was the former leader of the Sun Belt Conference officiating program and had a 21-year on-field career, including six years in the Gulf South Conference before a  15-year run in the SEC. Shaw currently serves as the chair of the CCA National Mechanics Committee, a position he has held since 2011.

“As a coordinator, I tried to stay on the leading edge of our game,” Shaw said. “I’m probably most proud of the relationships built with other coordinators.

Shaw’s accomplishments include: rewriting the CCA Mechanics Manual, introducing the first O2O (Official to Official) communications system in college football, revamping the SEC/Sun Belt grading process and being among the first collegiate group of football officials to join NASO as group members.

“I didn’t come up with the concept of large groups joining NASO, but the SEC was an early adopter and we paved the way for others to join,” Shaw said.

“With everything he has on his plate, for him to find time to help NASO grow, sustain itself and then advocate on behalf of all who serve as officials has been remarkable,” Mano said. “Steve’s own stature and the respect he has earned in officiating brought and continues to bring an extra measure of respect to NASO. We are in his debt.”

The Medallion recognizes an individual or organization that has made significant contributions to the betterment of NASO. These activities include organizational leadership, education, training, promotion of officiating and other events. The award is named for Narol, a longtime legal columnist and consultant to NASO, who died in 2002. Narol received the award posthumously in 2003, when the Medallion was named in his honor.

Fox 40 International is the premier producer of officiating whistles. The complete line of Fox 40 products includes whistles for all uses, whistle attachments, Fox 40 gear, pro coaching boards, mouthguards and marine/outdoor products. Fox 40 continues to invest in new technology, designs and machinery, resulting in many new products being launched each year. Fox 40 has sponsored the Celebrate Officiating gala and the Gold Whistle Award for more than two decades.