The National Association of Sports Officials acknowledges Dak Prescott’s “walk-back” from comments he made on Sunday, January 16 after his playoff loss to the San Francisco 49ers. Those comments lauded Cowboys’ fans for their targeting of the officiating crew with projectiles thrown from the stands. Once emotions cooled, Dak realized the serious error of his words condoning such bad behavior. Yet, even with his apology now made public, NASO believes the nature of what he said was so egregious the NFL should remove Dak from consideration for the Walter Payton Man of the Year award.

Further, it should not go without notice that a number of the media representatives at Dak’s press conference not only did not call him out for his outrageous comments, they seemed complicit with their howls of laughter, as if the matter was fodder for humor. What he said was in no way funny.

In these times, it is of critical importance that all of us in organized sports affirm and reaffirm a commitment to sporting-like behavior and to the safety of the men, women and young people who officiate the sports that mean so much to all of us. 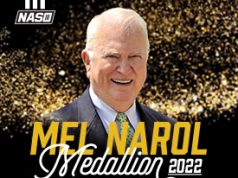