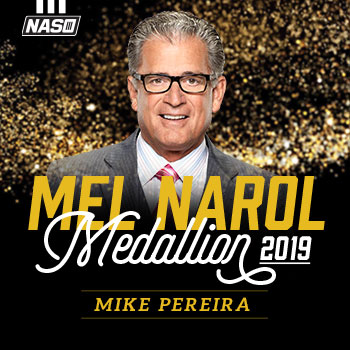 RACINE, Wis. — Mike Pereira, NFL and NCAA football rules analyst with Fox Sports, has been selected by NASO as the recipient of the 2019 NASO Mel Narol Medallion. Pereira joined Fox after serving as the NFL vice president of officiating. He also had a long and successful career officiating in NCAA Division I football and the NFL.

Pereira will be honored with the Medallion at the Celebrate Officiating Gala on July 30 at the NASO Sports Officiating Summit in Spokane, Wash.

“As my officiating career progressed, I found myself more and more able to give back to football officials and the officiating profession. That’s meant a lot to me,” Pereira said.

Most recently, Pereira has focused his energy on helping U.S. military veterans land positions as sports officials, in his “Battlefields to Ballfields” (B2B) program. The effort is designed to promote officiating as a field for veterans re-entering the U.S. workforce.

“Mike is one of the most unique people you’ll meet in the world, inside or outside officiating,” said Barry Mano, NASO president and founder. “He stands up for officials, working on issues that help us develop and get better.”

Pereira has stepped up as a signature contributor to NASO’s new Legacy program, where supporters can contribute to NASO through a will or trust. “That’s leadership,” Mano said. “Mike made his contribution a priority, and that sends a positive message to others that the Legacy program is important for NASO’s mission in the years ahead.”

Pereira is also a former chair of the NASO Board of Directors.

“Mike stands up for officials both on and off the field. He has been preeminent in walking the fine line of informing his viewing audience about the rules and officiating, and not alienating the very officials he is speaking about. That is a learned skill and he has shown he is the very best at doing that,” Mano said.

Pereira’s B2B program is an extension of his continuing contributions to the sports officiating industry. Coaching and finances are invested in veterans seeking to become sports officials.

“I was a mediocre athlete but found my niche as a football official,” Pereira said. “Once I got a few games under my belt, I knew it was something special for me. Now I want to make sure others have the right opportunities to succeed on the field or court. It’s a tough job and getting tougher every day. We have to provide the best and most up-to-date tools available to bring new officials into the system and ensure they stay with it.”

The Medallion recognizes an individual or organization that has made significant contributions to the betterment of NASO. These activities include organizational leadership, education, training, promotion of officiating and other events. The award is named for Narol, a longtime legal columnist and consultant to NASO, who died in 2002. Narol received the award posthumously in 2003, when the Medallion was named in his honor.

Past Medallion recipients include: