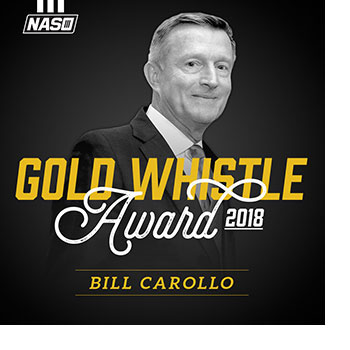 RACINE, Wis. — Bill Carollo, Shorewood, Wis., former NFL referee and currently coordinator of football officials for the Collegiate Officiating Consortium, will receive the 2018 Gold Whistle Award, presented by the National Association of Sports Officials (NASO). The award, the highest honor in officiating, will be presented in New Orleans on Tuesday, July 31, during the Celebrate Officiating Gala, sponsored by Fox 40 International, which caps the 2018 Sports Officiating Summit.

NASO President Barry Mano said Carollo’s “influence and fingerprints are on so many organizations, leagues and conferences. But well beyond that and more importantly actually is the fact that Bill has personally helped so many officials have wonderful careers, and at many levels.”

“It was very nice when I got the call from Barry,” said Carollo. “I tried to act not so surprised, but I was.”

Carollo said he learned the lessons of hard work and perseverance from his parents, who believed in education. As one of six children, Carollo had to figure out how he was going to pay for college. He did so by earning one of the last full scholarships for the University of Wisconsin-Milwaukee football program, where he was quarterback for the Panthers between 1970-73. The school discontinued football shortly thereafter.

A grade school coach got him into officiating. His mentors included legend Gene Berce, whom Carollo still meets regularly for breakfast, and Pancho Palesse, whom Carollo calls, “The most famous official out of the Milwaukee area.”

As Mano said, “Bill has never forgotten where he came from.”’

“It’s a bigger challenge,” he said, “and it allows me to help give back (to officiating) — try to make a bigger dent in the second half of my career. I came to the realization that I could do more to help officiating by coming off the field.

“I realized I didn’t need another Super Bowl ring,” he said. “I tried to look at the big picture and now if I create opportunities for 10 more people, 25, 100 more (in officiating) then I’m doing something. I’m helping make it (officiating) cool, make it a respected profession.”

The Gold Whistle Award is presented annually by NASO. Those considered are individuals or groups that have made significant contributions to the betterment of officiating, exhibit a high degree of integrity and ethics and other qualities that are held in high regard by the industry. Candidates must have a consistent record of presenting officiating in a positive light as well as exhibiting a “service above self” attitude. Public service to officiating, having a motivating effect on others and/or strong community involvement are considered.

Fox 40 International is the premier producer of officiating whistles. The complete line of Fox 40 products includes whistles for all uses, whistle attachments, Fox 40 gear, pro coaching boards, mouthguards and marine & outdoor products. Fox 40 continues to invest in new technology, designs and machinery, resulting in many new products being launched each year. Fox 40 has sponsored the Celebrate Officiating gala and the Gold Whistle Award for more than two decades.