Life lessons come to us daily and often they are adaptable to sports officiating.

The year was 2013 — retired San Antonio Spurs center David Robinson and I were invited to visit a Navy SEAL team that had just returned home from deployment.

David provided thoughts on servant leadership and his time at the Naval Academy. I presented an Operational Stress education and awareness message. The Navy SEAL team was attending a retreat outside of our nation’s capital and we had dinner with the service members and their families. Later that night we made the trip to Washington D.C. to prepare for morning meeting with General Jeff Buchanan, U.S. Army. We were his guests for the Veterans Day wreath laying at the Tomb of the Unknowns. David, his sister and brother-in-law, and my wife Billie and I had the honor to be front and center for the reverent ceremony.

After the formal ceremony we were invited to the Memorial Amphitheater behind the Tomb of the Unknowns where President Obama spoke of our military veterans and said, “We honor a debt we can never fully repay.” The president then introduced Mr. Richard Overton, the oldest living WWII veteran at that time — 107 years young. Mr. Overton stood as all of those attending did to salute him with a standing ovation.

At the conclusion of the president’s words, David and I made eye contact and we moved as fast as we had since coming of the NBA floor. We wanted to meet a national treasure. We made our way to Mr. Overton and had photos taken with him. David shook his hand and spoke with Richard. As I watched, the thoughts of this man fighting for our freedom was flooding my mind. It struck me that had I lived during the same time he was serving we would have drank from separate water fountains and used separate restrooms, yet he fought for me and my family. I was overwhelmed with gratitude and expressed my thanks over and over as I shook his hand.

I may have been overzealous in my appreciation because after Mr. Overton had heard enough — he squeezed my hand harder and pulled me toward him as he said, “You know, I can still do more!” Then he gave a smile and a wink. The oldest living WWII veteran wanted it made known he had more to contribute.

Mr. Overton went on to live five more years. He died Dec. 27, 2018 at 112 years and 230 days old. I think of Mr. Overton often and would encourage you to do the same. His life story is full of life lessons — the one he taught that fall day is that we all can do more … for our world, our community and even officiating to make sure it is better than when we arrived. When you think you have done all you can, just think of Mr. Richard Overton and know you too can do more! 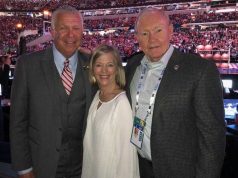 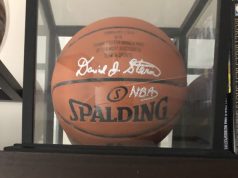