RACINE, Wis. (June 4, 2021) — Racine County C­ircuit Court Judge Eugene A. Gasiorkiewicz ruled on June 2 that he would not second-guess the judgment of high school wrestling officials after a disqualified wrestler sought intervention by the courts.

The ruling marks a dramatic reversal of a previously instituted Feb. 8, 2019, temporary injunction by then-Racine County Circuit Court Judge Michael J. Piontek, who granted a request by wrestler Hayden Halter and his family, to overturn his disqualification during the 2019 Southern Lakes Conference wrestling tournament.

“Judgment calls by sports officials should not be subject to legal challenge in the courts,” said Barry Mano, National Association of Sports Official (NASO) president. “Judge Gasiorkiewicz’s ruling puts an exclamation mark on that principle. We are heartened that, after 2-1/2 years, such wisdom has finally prevailed.”

Dave Anderson, Wisconsin Interscholastic Athletic Association (WIAA) executive director, said, “This was a long, protracted case but one that needed to be seen to conclusion, for obvious reasons. Just as the officials brought their very best to this tournament two and a half years ago — they stood-up and gave their unflinching best in court over the course of these many months, hearings and depositions. Their expertise and credibility were noted repeatedly by the court and played a key role in the final decision by the court.”

In the closing seconds of the conference tournament’s championship match, Halter was issued an unsportsmanlike conduct penalty for use of profanity to object to veteran official Mike Arendt’s ruling. Arendt is an NASO member and a state tournament level referee. Moments later, after Halter won the match, Halter briefly flexed his muscles in the direction of an opponent’s spectating area and was penalized for taunting. In both instances, Gasiorkiewicz found testimony by the officials and match video supported the penalizing of the wrestler’s actions.

Under NFHS rules, adopted by the WIAA, unsportsmanlike conduct penalties are considered judgment calls and are not subject to protest or review by the WIAA.

The wrestler’s second unsportsmanlike conduct infraction resulted in disqualification. Under WIAA rules, any wrestler disqualified for unsportsmanlike conduct is ineligible for the next competitive event. Because the next event was the first round of WIAA postseason wrestling, defending state champion Halter would have been unable to defend his title, which prompted the Halter family to seek court intervention. With Piontek’s faulty injunction in hand, Halter ultimately won his second state championship on Feb. 23, 2019.

After reviewing testimony provided by Arendt and an assistant referee, along with other WIAA referees assigned to the tournament who witnessed the match, Gasiorkiewicz opined during an oral ruling that the “court is not trained as an officiant” and is “not trained in WIAA or NFHS rules.”

Gasiorkiewicz also said the court’s role was not to second guess the actions of sports officials. To do otherwise would create a “risk of a flood of litigation by parents” wanting to challenge sports official’s rulings in their children’s athletic contests, he said.

About the National Association of Sports Officials (NASO) 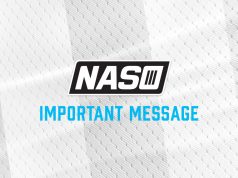 Let’s blow the whistle on COVID